The Music of Agape Force

From the very beginning, music always played a key role in the Agape Force in one way or another. From the early days of the UnChoir to the glory days of Silverwind, and Candle, who captured the ears of a generation and raised the bar for Christian Children's Music with "Music Machine", "Bullfrog & Butterflies" and more, music remained a constant among us.

Many of us had guitars and a few could actually play them. Whether we knew hundreds of chords or just 3, those guitars became the brushes we used to paint the colors of our devotion. We read our bibles and wrote songs from what we read. We heard messages and made songs of the themes that moved our hearts. In the earliest days, the thought of albums of those songs never crossed our minds. These were songs we wrote for the Lord and each other and sang to the Lord and each other.

Kathy Salerno was a great painist. And initially the UnChoir (later called the Tour Team) was really more like a choir and keyboard driven.

The UnChoir sang songs and chorus's written by Carrie Gonzalo, Andre Crouch and others of that time. They were a blend of peppy or powerful songs and very different from what most people heard in church, but not THAT much different. Slowly, the songs we wrote ourselves started finding their way into the ministry we did. First, through little insertions into the program - for instance Jim and I would step out and do a song or two in the middle of a service that was mostly a Tour Team thing. Later there were other bands that had their own ministry gigs. Before long we were thinking about doing an album. After that it seemed like it all just started to snowball. 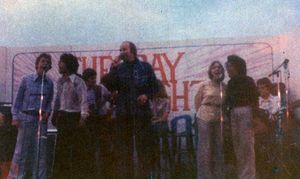 As we find musical tidbits that we can share, we'll we'll make them available to listen to and perhaps to download. Perhaps they will take you back to that time and give you an ear full of memories and perhaps insight into what we were all about. Please feel free to download these songs and/or albums that are no longer in print. The choose your own price section is just that. And - it's a donation. Pay whatever you think it's worth - or whatever you have  and would like to give. Pay nothing at all if you want to. We are happy you found us here and hope we can be a blessing in some way.

Within the Gate may have been the first live worship album ever. Recorded in the Agape Force gymnasium at the ranch in Garden Valley, Texas it was recorded live in one day. Feel free to download these Within the Gate songs